President Jokowi Hands over 6,000 Certificates of Land Rights in Jambi 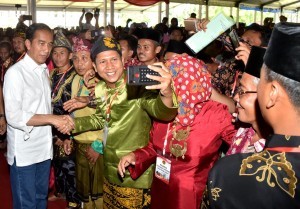 President Jokowi hands over 6,000 certificates of land rights to the community in the courtyard of Jambi Governors office on Sunday (16/12). (Photo by: BPMI)

In his working visit to Jambi Province, Sunday (16/12), President Joko Jokowi Widodo handed over 6,000 certificates of land rights to the public in the courtyard of the Jambi Governors office.

In his report, Minister of Agrarian and Spatial Planning/Head of National Land Agency (BPN) Sofyan Djalil said that the prepared certificates were for 91,246 plots of land consisting of 82,729 plots from the Complete Systematic Land Registration (PTSL) program and 8,517 plots from the Agrarian Reform Land Redistribution (TORA) program.

As many as 6,000 people received the certificate from the PTSL program, said Sofyan Djalil.

On the occasion, the President explained the reason for accelerating the handover of certificates to the public. That is because of the many reports regarding land disputes that he heard every time he went to the region.

I heard about land disputes every time I visit a region, said the President.

The President also ensured that the Government would continue to seek the issuance of this certificate as proof of ownership rights to the public. According to him, currently there are still many people who do not have recognition for the land they have.

So many disputes occur. Previously, the BPN office only issued 500,000 certificates a year throughout Indonesia. This means that one must wait for 160 years for their certificate to be issued, the President said.

Therefore, in 2015, the President ordered Minister Sofyan Djalil so that the program for distributing land rights was accelerated and provided free to the public. He also gave a target ten times more than usual, namely 5 million certificates must be handed over in 2015.

President Jokowi reminded the recipients to keep their certificates properly. Not only that, the President also appealed to the public to be wiser if they want to use the certificate as collateral to the bank.

I suggest, if you want to use the certificate as collateral to the bank, please calculate it first, can you make the installment every month? If you cant, dont borrow money from the bank. Be careful, please count and calculate, he said, adding that the public must use all of the principal loan for productive purposes, such as business capital, work capital or for investment.

Use it for running a business, and save the profits. You may use your savings to buy a motorbike or car from the profits, not from the principal loan, the President concluded.