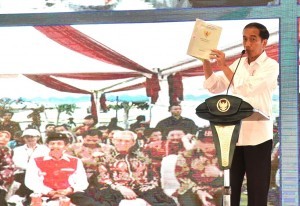 In addition, the four Ministers who attended the event in the four provinces were Minister of State Secretary Pratikno in Yogyakarta, (Yogyakarta), Minister of Agrarian and Spatial Planning/Head of National Land Agency (BPN) Sofyan Djalil in Padang (West Sumatra), Minister of Public Works and Public Housing Basuki Hadimuljono in Bengkulu (Bengkulu), and Minister of Villages, the Development of Underprivileged Regions and Transmigration Eko Putro Sandjojo in Baubau (Southeast Sulawesi).

The President suggested the recipients of the certificate to keep it well in a safe place. If it is to be mortgaged, it must be correctly calculated and only used to increase business capital. “Do not forget to have a copy of it. Keep in the cupboard and the other put in another cupboard. If lost, it is easy to make a new one,” the President said.

Furthermore, the President explained that in his working visit to a number of areas in the country, he always took the time to distribute land certificates for the people. This is because the number of land disputes that occur is due to the absence of proof of legal ownership of land owned by the community. “There is a dispute between people, between communities and the SOEs. We will not let this happen,” the President firmly said.

The President has also ordered relevant officials to work day and night to meet the target of issuing nine million land certificates by 2019, including adding measuring officers to overcome measurement constraints in the field. “I order the Minister of Agrarian and Spatial Planning, given this is the Minister’s duty to distribute the certificate. If lack of measuring officers, please add,” the President said.

Thanks to the hard work, until the end of December 2017, the Ministry of Agrarian and Spatial Planning/the BPN successfully met the target of mapping, measuring and registering 5,220,509 parcels of land or more than 100 percent of the set target. “However, only 4,198,702 of which or about 81.81 percent of the set target are qualified to have the certificate issued,” Coordinating Minister for the Economy Darmin Nasution said in his report. Therefore, the Ministry of Agrarian and Spatial Planning will continue to meet the targets set by the Government.

“On the 28th of December 2017, the Government will distribute as many as 1,082,950 certificates to the community in 7 Provinces, namely South Sumatra, Jambi, Lampung, East Java, West Kalimantan, Central Sulawesi, and South Sulawesi,” Minister Darmin added.