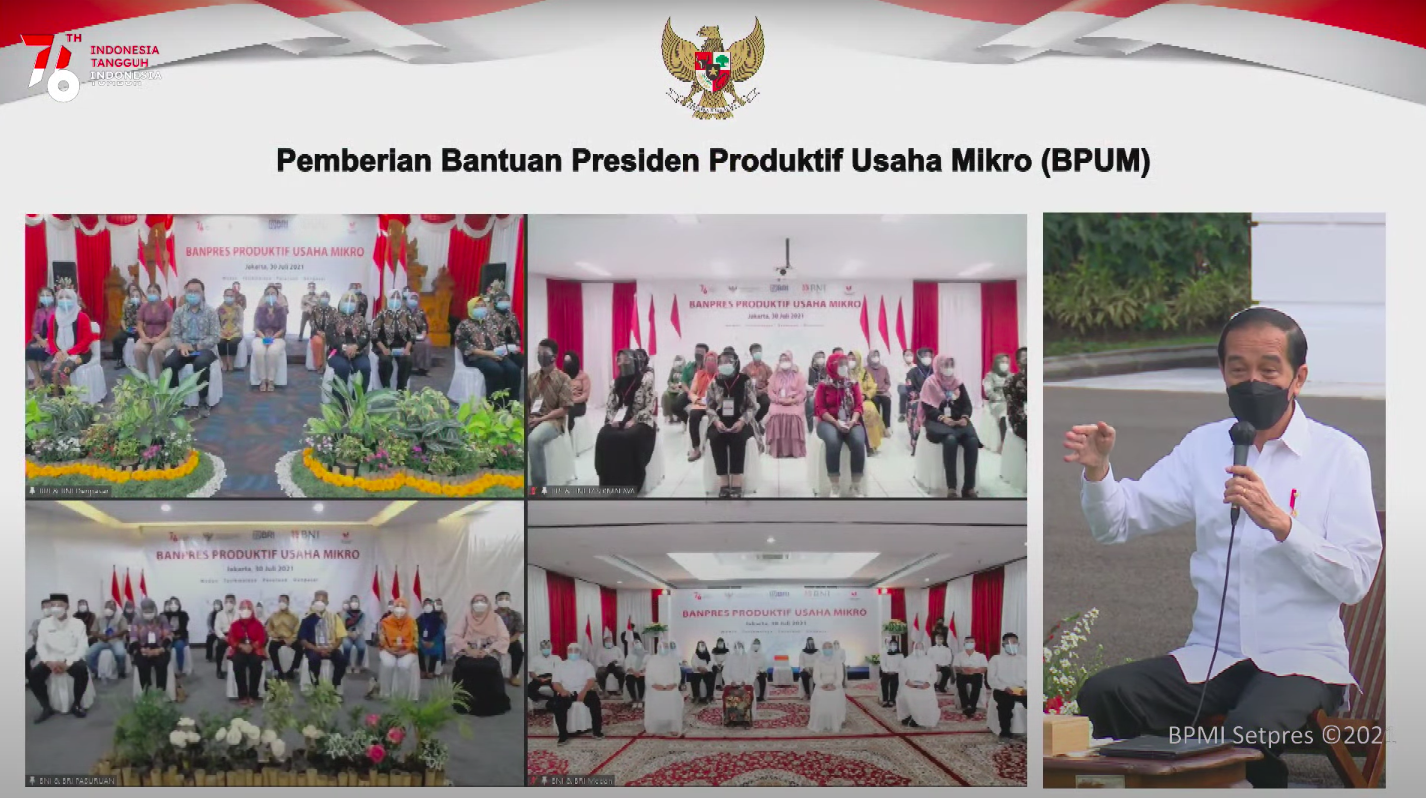 President Joko “Jokowi” Widodo Friday (30/07) at the Merdeka Palace symbolically handed over the 2021 Productive Presidential Aid for Micro and Small Enterprises players to twenty representatives from across Indonesia.

“In 2021, we will distribute this Productive Presidential Aid worth Rp15.3 trillion to12.8 million micro and small enterprises players throughout the country. We began the distribution today,” the President said.

For the record, each micro and small enterprises player will receive Rp1.2 million.

“We hope this aid can help boost our economy,” President Jokowi said, while stressing that the difficulty due to the COVID-19 pandemic is felt by everyone, not only micro and small enterprises players,but also medium to large business players.

“Everyone is facing these difficult conditions and these affect not only business players in Indonesia but also those around the globe,” he said.

Therefore, the Head of State advised micro and small enterprises players to stand strong and to be resilient amid the situation.

“You have to work even harder in this situation. Stay strong. Even though the turnover may be down to 75 percent or down to half, you have to keep going,” the President said.

On the occasion, the President also underscored that the Government continues to boost national vaccination drive, which is expected to be completed by the end of this year.

“If 70 percent [of the population is vaccinated], at least the transmission of the virus will be somewhat slowed down once we achieve herd immunity,” he said.

The Government, the President pointed out, also continues to balance efforts between handling COVID-19 and reviving the national economy.

One of the measures taken, he added,is the implementation of emergency community activity restrictions (PPKM Darurat) in response to a spike in cases due to the more transmissible Delta variant.

“We had no other way at that time. Because on the islands of Java and Bali, we saw that all the dots were red.None of them were yellow.So, we made a very difficult decision, namely by implementing the emergency PPKM,” he said.

After the implementation of the policy, according to the President, cases in several regions on Java island have begun to slowly decline.

“I see that cases in regions in the island of Java have started to slowly decline, but regions outside Java have seen a rise.This is indeed the Delta variant.The transmission is very fast,” he said, while reminding the people to stay disciplined in observing health protocols.

“We all hope that this pandemic will end soon. Do not forget to wear a face mask, to wash your hands, to avoid the crowd, to maintain a safe distance. These measures are crucial to prevent further spread of the virus,” he remarked. (FID/UN) (FI/EP)