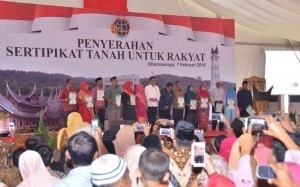 The reason why a land certificate is important, according to the President, every time he visit regions, provinces, or cities, people complained on land disputes. It happened everywhere.

Secondly, the President added, after receiving the certificates, it should be laminated to prevent from damage. It should also be photocopied. If it is lost, it will be easy to trace it at the BPN office. He also added, if the certificate will be used as collateral, it must be well-calculated and use it as a capital for investment or business.

To conclude, Ladies and Gentlemen, I leave this country to you, a great country with 17,000 islands, one of them is Sumatra, and 714 diverse tribes, the President conveyed while stating that the diversity of Indonesia is exemplified by other countries such as Afghanistan.

The Head of State reminded us as brothers and sisters of the nation do not scorn each other, particularly during elections of regional heads, governors, or president.

Let us stay together as compatriot that Allah gifted us a nation with diversity, he ended while mentioned that Indonesia is a huge country, from Sabang to Merauke, from Miangas to Rote Island, which must be preserved as a Unitary State of the Republic of Indonesia, and we also have to maintain ukhuwah Islamiyyah (Islamic brotherhood) and watoniyah (brotherhood between fellow countrymen).