President Jokowi Has Lunch with Fellow Indonesians in Singapore 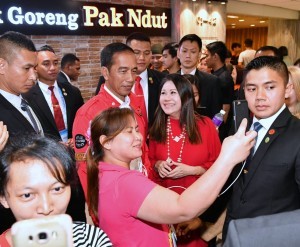 Wiwi Wulandari, an Indonesian migrant worker working in Singapore, was one of several lucky people who had lunch with the President. It never crossed the mind of the 38-year-old woman from Yogyakarta that she was invited to have lunch with President Jokowi. In fact, she never dreamed of meeting the President and shaking his hand.

Upon his arrival in Orchard Road, Singapore at 3.30 p.m. local time, President Jokowi was warmly welcomed by Indonesian people living in that area.

Wiwi was in the crowd who greeted the President with great enthusiasm. Just like Wiwi, other Indonesian citizens also took this moment to greet and take pictures with the President.

Today, I want to learn how Indonesian cuisine infiltrates another country. We searched for Indonesian restaurants here and found that there are Bebek Tepi Sawah, Sari Ratu, and Garuda. Other restaurants must open their branches here too. The owner of Sang Pisang (his youngest sons business) is (studying) here, but too bad Sang Pisang isnt here yet, the President said.

In the restaurant, President Jokowi instructed the Presidents aide Colonel Mar. Ili Dasili to invite Indonesian citizens who waited outside the restaurant to join the lunch.

Bring those who are waving their hands outside to come here to join our lunch, he said.

Wiwi and several other people did not waste the opportunity. They went in, sat down, and ate together with the President and his entourage shyly.

I overjoyed, I cannot believe it. At first, I have no idea that the President is here. When I heard about that news, I ran to the restaurant. I hope Indonesia, under President Jokowis adminstration, can be more advanced and be a better country, Wiwi said.