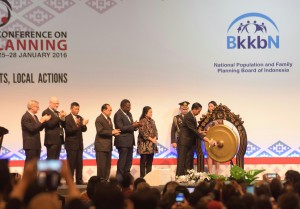 President Joko Jokowi Widodo said the world now is extremely changing. It becomes more complex and the next challenges will be harder. It all could be faced if peoples quality of life is great.

Only the healthy and prosperous mother, children, and family can create generation that have great quality, character, and personality, also care for others, President Jokowi said while delivering a remarks at the opening of the 2016 International Conference on Family Planning, in Nusa Dua, Bali, on Monday (25/1) afternoon.

The President considered the achievements of family planning in the world now caused by the hardwork, perseverance, and leadership from pure-hearted peoples.

Indonesia feels honored to be the host of the 2016 International Conference on Family Planning, and proud of your attendance, President Jokowi said, receiving the applause from the participants of the event.

In the opportunity, President Jokowi said that the Government of Indonesia now works hard to revitalize the Family Planning Program.

The President realized that the next challenges and responsibilities faced by families in Indonesia will be harder.

In the population issue, according to the President, Indonesian population growth rate in 2014-2015 was 1.32 percent. It means population in Indonesia increases around 3 million people per year. The averange fertility rate per woman in 2010-2015 was 2.4 children or in other words every woman gives birth to 2-3 children.

Furthermore, Indonesia is predicted to experience demographic bonus in 2020-2030, when the productive age population is higher than elderly people and children population.

According to the President, health programs conducted by the Government includes providing an affordable and free treatment for family planning couple.

We conducted trainings for thousands of doctors and housewives to educate the people about family planning, the President said while mentioning that the Government encourages the participation of Indonesian women who joined the Family Welfare Movement (PKK) to become the motor of Integrated Health Post (Posyandu), family planning program, and other programs on family welfare around the villages in Indonesia.

Meanwhile, the Government also encourages regional governments to increase the dissemination and education on family planning, as well as to put family planning program as the priority in every city or regency around the country.

The President asserted according to the sustainable development agenda which was ratified by the worlds leaders on last November in the United Nations (UN), we must develop a planet that we want to be in 2030.

The development aims to unite all people in the world globally. However, according to the President, in order to achieve global goals we must conduct local actions and measures to the people in villages.

Therefore, the President added, to maintain the sustainability of economic growth in every country, and every region, investment on family planning is absolutely necessary. The President mentioned that the stigma, discrimination, and abuse on women must be ended.

I hope in this International Conference on Family Planning, the main basis to materialize a planet that we want to be will be discussed, President Jokowi asked.

As the first step, the President added, the access to family planning services and equipments must be provided. Thus, mothers will be more wise and be able to decide the time when they want to have babies. It also leads to safe delivery, so the mother and baby can have the best opportunity to live well.