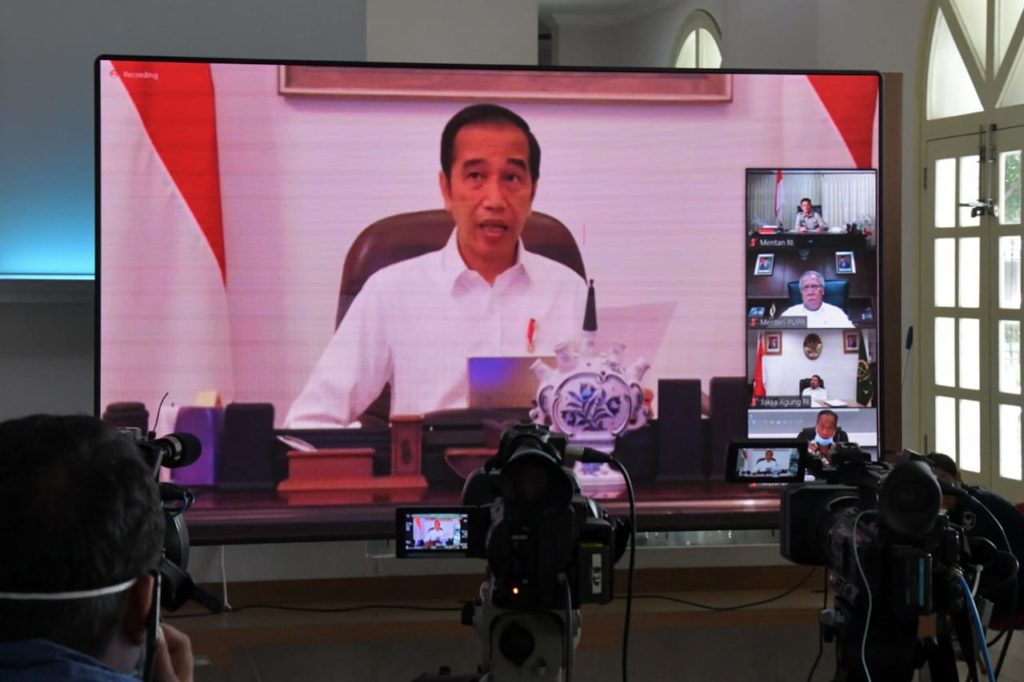 President Joko “Jokowi” Widodo has once again underscored the importance of cooperation between the central and regional governments in the fight against COVID-19.

“Communication between central and regional governments must be maintained so that all of us have one vision and one common line in containing COVID-19,” the President said in his introductory remarks on an online limited meeting, at the Merdeka Palace, Jakarta, Monday (6/4).

On the enforcement of Large-Scale Social Restrictions (PSBB), President Jokowi also underlined the importance of speed to contain the COVID-19 spread.

“I notice that we already have Minister of Health Regulation Number 9 0f 2020. Most importantly, I want to ask several questions, especially on the implementation of the regulation to prevent and break the chain of COVID-19 spread,” the President stated.

To prevent the acceleration of COVID-19 spread in prisons, President Jokowi explained his stance on the parole of inmates.

However, the President stated that the inmates should not be released unconditionally and that conditions, criteria, and supervision should be applied.

“We have never talked about graft inmates in our meetings. On Government Regulation Number 99 of 2012, I need to say that there is no amendment. The release is only for those committing general criminal,” he said.

The President also said he had instructed that the PCR (Polymerase Chain Reaction) test is prioritized for the people with a high-risk of infection, including medical doctors and their families, the PDP (Patients Under Treatment) and the ODP (People Under Surveillance).

“The speed of examination in the laboratory should be increased. With that speed, we expect to find out who have tested positive and who have tested negative,” President Jokowi said.

Furthermore, the President said that the speed on the procurement and distribution of PPE and medical equipment required by hospitals should also be a concern.

On the WHO recommendation that everyone should wear face masks, the President instructed the distribution of face masks to the people.

President Jokowi also stressed the importance of educating the people that there are currently 207 countries affected by the pandemic in order to raise their awareness.

“The information about the 10 countries with the highest cases should be disseminated,” he said, while asking for updates on the percentage of regencies, provinces and cities that have carried out budget reallocation and budget refocusing.

“This is very important, especially related to social safety net to ensure that they can be distributed immediately to the people,” he concluded. (FID/EN).