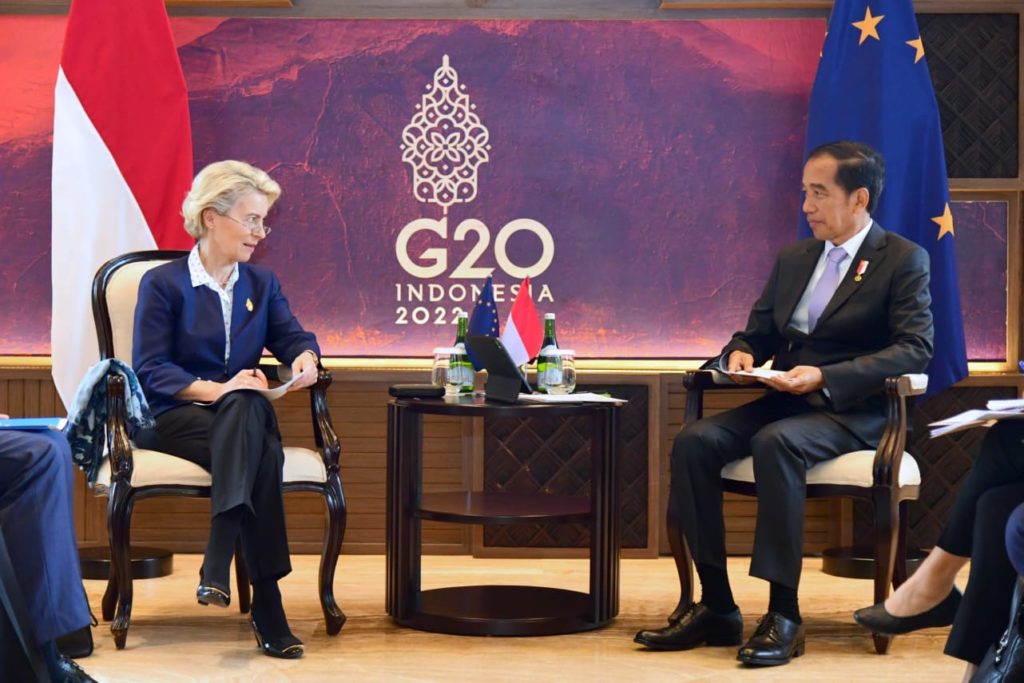 President Jokowi at a bilateral meeting with the President of the European Commission Ursula von der Leyen, Monday (11/14). (Photo by: BPMI of Presidential Secretariat/Muchlis Jr)

During the meeting, President Jokowi pushed for a significant advancement of the Indonesia-European Union (EU) cooperation negotiation through the Comprehensive Economic Partnership Agreement (CEPA).

“The 12th negotiation has been scheduled to be held at the end of 2022. I hope the negotiation will make a progress, including for government procurement of goods, SMEs, and export tax,” said the President when opening the meeting.

As Indonesia is the Chair of the ASEAN in 2023, President Jokowi expressed hope for stronger cooperation between the ASEAN and the EU.

According to the President, one of the focal points of Indonesia’s ASEAN Chairmanship is to make concrete cooperation in the Indo-Pacific region.

President Jokowi also asked the European Commission and the G7 to lend support and flexibility so that the G20 Summit can produce a declaration.

“I want the G20 to be able to produce concrete deliverables that the world has been waiting for. Once again, the support of Your Excellency will be very much appreciated,” he said.

In the meantime, the President of the European Commission expressed appreciation for Indonesia’s G20 leadership that continues to work together to formulate joint solutions to global crises, adding that Indonesia is deemed as a reliable partner in various strategic issues, including renewable energy and food security. (MAY/UN) (DH/MUR)