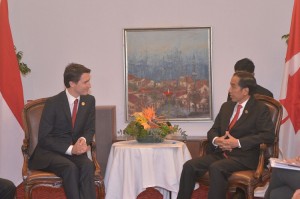 On the sidelines of the G-20 Summit in Antalya, Turkey, President Joko Jokowi Widodo had a bilateral talk with the newly appointed Prime Minister of Canada Justin Trudeau at the IC Santai Hotel on Sunday (15/11) morning local time.

It was the first bilateral meeting for PM Trudeau, who took office on 4 November.

Congratulation on your appointment as Prime Minister of Canada. We want to build stronger cooperation with Canada, President Jokowi said, starting his talk with PM Trudeau.

For the record, trade volume between Indonesia and Canada in 2014 reached US$ 2.6 billion.

I asked Canada to widen their market for Indonesian products such as rubber, paper, furniture, electronic, footwear, coffee and tea, President Jokowi said.

I hope Canadian businessmen could take benefit of these opportunities and condition in Indonesia, the President said.

Furthermore, President Jokowi and his Canadian counterpart also talked about efforts to forge cooperation on climate change, as well as on transnational crimes eradication.

In the meantime, in his press release on Sunday (15/11), Presidential Communication Team Member Ari Dwipayana said both leaders conveyed their condolences on the terrorist attacks in Paris.

President Jokowi and PM Trudeau have agreed to fight against radicalism and terrorism. Therefore, the two leaders will promote cooperation on several sectors, such as human rights, development of  democracy and strengthening inter-religion dialog, Ari said.

Ari also said that President Jokowi encouraged Canada to strengthen its commitment as Indonesia did to reduce emission by 29 percent in 2030 and 41 percent with international support,

He added, that both leaders have also agreed to increase cooperation on energy efficiency and renewable energy sectors, as well as on peat land management.

Accompanying the President in the talk were Minister of Foreign Affairs Retno Marsudi, Minister of Finance Bambang Brodjonegoro and Minister of State Secretary Pratikno. (EN/ES) (RAS/EP/YM/Naster)