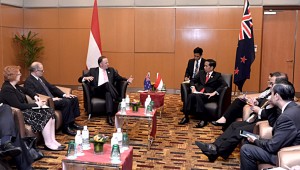 On the sidelines of the 27th ASEAN Summit and other related summits, President Joko Jokowi Widodo on Saturday (21/11) held a bilateral talk with New Zealand Prime Minister John Key at a meeting room situated on the 4th floor of the Kuala Lumpur Convention Center (KLCC), Kuala Lumpur, Malaysia.

Prime Minister Key said that he would visit Indonesia in 2016 and President Jokowi welcomed the plan and said it would certainly boost ties between the two countries.

In the meantime, in order to reduce the deficit, President Jokowi hopes that New Zealand would provide market opportunities for Indonesian products, especially agricultural products such as mangosteen, mangoes and salak (snake fruit).

We also hope that New Zealand businessmen would make investment in Indonesia in food and energy sector, the President said.

For the record, New Zealand is known to have successfully used geothermal as a source of energy, while Indonesia has the largest geothermal reserves in the world.

We would like to invite investors from New Zealand to invest in the geothermal sector, President Jokowi said.

Meanwhile, Prime Minister Key welcomed efforts to foster cooperation between the two countries, especially in trade and energy sectors. He also applauded the way the Indonesian Government handled refugees from other countries.

Furthermore, both leaders also discussed efforts to fight terrorism and radicalism that frequently hit a number of countries recently.

On that occasion, President Jokowi emphasized the importance of making efforts (to boost) security and law enforcement in tackling terrorism and radicalism. However, the President said that religious and cultural approaches must also be prioritized.

At the end of the talk, President Jokowi expressed his hope that Indonesia and New Zealand could together promote cooperation with countries in the South Pacific.

We hope that trilateral cooperation between Indonesia, New Zealand, and countries in the South Pacific could improve capacity building in the region, the President said.