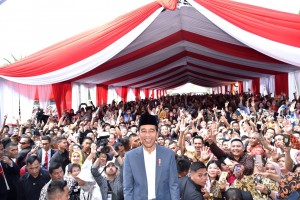 President Jokowi takes a picture with the people during open house at the State Palace, Wednesday (5/6). Photo by: BPMI

Among the crowd queuing to meet the President were Minister of Foreign Affairs Retno Marsudi, Minister of Marine Affairs and Fisheries Susi Pudjiastuti, Minister of Public Works and Public Housing Basuki Hadimuljono and Presidential Chief of Staff Moeldoko.

“Eid Mubarak” the President said to his guests.

Some of the people have been waiting at Silang Monas, an area near the palace, since the morning to meet the President.

After receiving guests at the State Palace, President Jokowi walked to the main building of Ministry of State Secretariat and Silang Monas to meet the people, shake hands, and take pictures with them.

The President also extended his apology to the people and said that he would soon depart for his hometown Solo. He also applauded the enthusiasm of the people who have been there since the morning to meet him. (BPMI/EN)