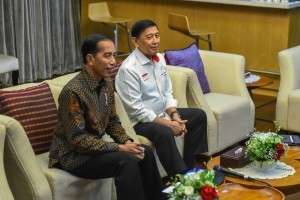 On the sidelines of two limited meetings, President Joko Jokowi Widodo on Monday (14/1) at Merdeka Palace Jakarta held a teleconference with the former President of the Republic of Indonesia Prof. Dr. Baharudin Jusuf Habibie, who is hospitalized in Germany.

Habibie is currently under treatment due to some problems with his eyes and kidneys. On the teleconference, Habibie explained that he is going to have his eye lenses replaced. Meanwhile for the kidneys, the doctors in Germany are using bioresonance technology to cure his kidneys.

According to Habibie, bioresonance is a non-invasive therapy in which the doctors placed electrodes on the skin and measured the entire body. The electrodes are connected to a machine which checks the energy wavelengths coming from the body, and then counteracts bad frequencies from the infected organ.

I am getting better, Habibie said.

President Jokowi conveyed that people of Indonesia wish Pak Habibie a good health and a speedy recovery. The President also slightly explained the current political and economic condition in the country is under control. (MAY/JAY/ES)