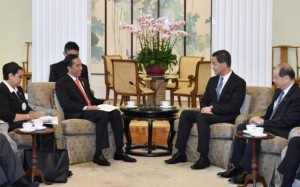 During the meeting, which takes place at the Drawing Room of the Government House of Hong Kong, both leaders also signed a Memorandum of Understanding on the measures to protect Indonesian Migrant Workers in Hong Kong.

I welcome this Memorandum of Understanding which is aimed at strengthening the protection of Indonesian Migrant Workers, President Jokowi said in the 30-minute meeting.

According to the President, there are currently 172,826 Indonesians living and working in Hong Kong and contribute to Hong Kongs economy.

President Jokowi also thanked the Government of Hong Kong for protecting all Indonesians there.I thank you for your honorable service to protect Indonesians living in Hong Kong. I believe Your Honorable will continue paying attention and providing protection to our citizens, President Jokowi told Leung Chun-Ying.

In the meantime, Hong Kong Chief Executive said that Indonesia is an important partner for Hong Kong. He also hoped the relations will not only be strengthened through Government to Government contact but also business to business. Last but not least is people to people contact, Chun-Ying said.

Trade and investment sectors also need to be enhanced considering Hong Kongs position as a hub which connecting the Mainland and the world, he added.

Chun-Ying also expressed the commitment of the Government of Hong Kong to give more attention and protection to Indonesian Migrant Workers. Indonesian Workers are part of our community, he said.

Regarding trade and investment sectors, President Jokowi asserted that Hong Kong is the fourth largest investor in Indonesia and Hong Kongs investment value in Indonesia reached US$2.25 billion in 2016 or increased by more than 200 percent compared to that in 2015 which was only at US$691.2 million.

President Jokowi also hopes that the establishment of Hong Kong Economic and Trade Office (HKETO) in Jakarta will contribute to the increase in trade transactions and investment between Indonesia and Hong Kong, including Hong Kongs investment on creative industry to Indonesia.

Concluding the meeting, President Jokowi said that he welcomed the signing of Memorandum of Understanding on cultural sector.

I believe this memorandum can strengthen cooperation in culture and arts as well as enhance the mutual respect, understanding, and friendship between our two peoples, President Jokowi said.