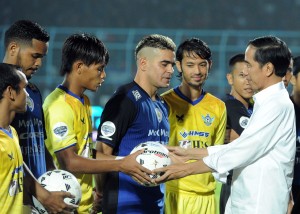 President Jokowi gives the balls to Arema and Persegres players before kickoff the Sudirman Cup, in Malang, East Java, on Tuesday (10/11) night

“Let’s make this tournament momentum for the spirit towards the revival Indonesian football,” President Jokowi asked.

Before performing the first kick or kick off that marked the opening of General Sudirman Cup tournament, President Jokowi gives 10 balls were already signed by to 10 players of Arema and Persegres Gresik United. Furthermore, the 10 players presented the balls to the audience through the players kick each.

Furthermore, after the kick-off, President Jokowi back into the seat in the VVIP stands to watch the game together with First Lady Iriana Joko Widodo, Minister of Youth and Sports Imam Nahrawi, TNI Commander Gen. Gatot Nurmantyo and East Java Governor Soekarwo.

President Jokowi and the government officials seem so enjoy the game, which ending 4-1 for winning of the host Arema Cronus teams.

The chief executive, who is also in charge of the Sudirman Cup, Lt. Gen. Agus Sutomo in his report to the President Jokowi said that the tournament are followed by 15 teams divided into three groups, ie group A held at the Kanjuruhan Kepanjen Stadium, Group B at the Captain Dipta Bali Stadium and group C at the Delta Sidoarjo Stadium.

General Soedirman Cup qualifiers take place on 12 to 22 November. The semifinal will be held in each of the semifinalists (home and away) on 9 to 17 January 2016 and the final held at the Bung Karno Stadium on January 24, 2016. (WID/BSM/NP/ES)/Sy.