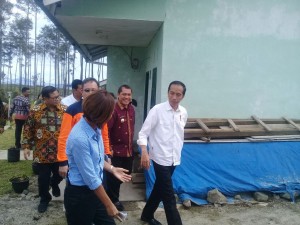 President Joko Jokowi Widodo hopes that the relocation of 1,873 families affected by the eruption of Mount Sinabung in Karo Regency, North Sumatera Province, can be completed by the end of this year.

As for the remaining 1,080 families, the President hopes that the relocation process can be completed at the end of next year. We hope that at the end of this year around 1,873 families can be relocated in 14 areas. As for the remaining families, – around 1,080 families – we hope the relocation will be completed at next year because Ministry of the Environment and Forestry has already designated the locations to be used for the relocations, the President said to reporters after visiting an evacuation center for Sinabung evacuees inSiosar, around 17 kilometer from Kabanjahe, Karo Regency, North Sumatera, Saturday(14/10).

President Jokowi added that the size of additional lands that will be given for the Mount Sinabung evacuees from the Environment and Forestry Ministry reaches 470 hectares in total.

During the visit the President also visited agricultural lands provided for the evacuees. We just visited the evacuation center from the refugees whose construction has been finished. Weve also completed the construction of 370 houses +that include land for agricultural activities. I also asked one of the evacuees whether they have begun cultivating their lands and he said he had begun planting potatoes, the President said.

On that occasion, President Jokowi also urged the residents to remain vigilant because it is not clear when the mountain will stop erupting.If the mountain has completely stopped the eruption, thats another story. However, we cant predict when the eruption will stop because based on the data that I received, there have been more than 200 earthquakes here in a year, which means that there are still small, medium, and big eruptions. Please be careful. We want to save and secure the residents, the President said.

The relocation will not only provide housing for the evacuees but also for agricultural lands.