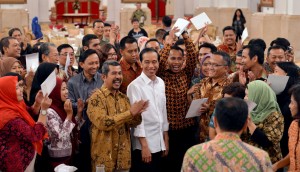 President Jokowi had a casual conversation with blogger of Kompasiana, at the State Palace, Jakarta, on Saturday (12/12)

When meeting with hundreds of bloggers who actively write in Kompasiana, at the State Palace, Jakarta, on Saturday (12-12), President Joko Jokowi Widodo expressed his hope to the bloggers to write more articles that could rise publics optimism. The writing which make us realize the importance of integrity and honesty that must be fostered, the President asked.

President Jokowi took an example when the economy slowed down, actually all countries experienced it. Even in a big country like Russia, their economy shows a minus. A President or a Prime Minister of a country oftenly asked President Jokowi how a big country like Indonesia could have 4.8 percent economic growth, and only decreased from 5 to 4.8 percent. What is the secret? However, in our country, a lot of people write about recession and economic dropping, the President said.

According to President Jokowi, he tends to talk possitively and optimistically. I want to change an obstacle into a challenge that must be faced. We could face it if we are united, the President said.

The President asserted that to build the country, we must foster trust in order to bring investors to the country because we are selling trust. People could say the President is crazy, mad and stubborn. I do not care. However, do not say bad things about our own country and its Government, the President said.

President Jokowi admitted, to change the old way of works, mindset, habits, and tradition to something new is not easy. It is experienced by the President when he was a Mayor of Solo. I just made it in the third year, but it did not reach 60 percent of the system. We can not fix everything, the President said.

When serving as the Governor of Jakarta, President Jokowi admitted that he tried to manage e-budgeting, but it was not a success. The program then carried out by the current Governor of Jakarta Basuki Tjahaja Purnama. We failed in the first year. The system is peoples wishes and  there must be a change. The fact is, it is not that easy, the President said.

Actually, the President said, in order to change Indonesia we must change the system. System will make people familiar. Familiarity will create a habit and it will lead to a culture, an ethos, the President said.

On that occasion, President Jokowi promised to fulfill the request of Kompasiana bloggers who want to participate in Presidents working visit to a region by using Indonesia’s first presidential aircraft. We will write from another side, different from the media reporters, one blogger said.