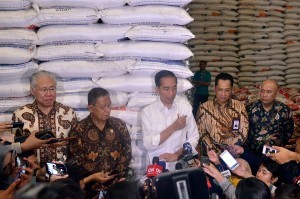 According to the President, the stock of rice is higher than the previous years. Usually the stock at the end of December was around 700,000 to 800,000 tons, but it reaches 2.1 million tons at the same period this year. It is a quite high figure.

In the previous years, the stock in December only this big (pointed a pile of sacks of rice), but this year we have many. Therefore, we must use this stock to make the price of staple food, especially rice, go down slightly, ” President Jokowi said adding that rice price shows a decreasing trend by Rp50, based on report from the Head of Bulog.

The President is optimistic that the price of rice will go down gradually given the Bulog has been conducting market operations. In addition, high stock will ensure the market and public that Bulog always ready to provide rice when it is needed.

When the stock is low, people starts speculating that the price is marked up. Thus, today we show the public that the stock of rice is high, the President affirmed.

President Jokowi went on to say that harvest season in February and March will also affect rice production supplies.

According to the President there is a simple way to reduce the price of rice drastically; send all stocks of rice at the Bulog to the market. However, this will harm the farmers.

Balance between production cost and market price must be maintained by the Bulog. The price should not be set too low because the farmers will be at a financial loss, President Jokowi firmly said.

Regarding the 2018 stock that was only 1.8 million tons, President Jokowi asserted that it is related to the production. If the production cannot meet market demand, we must import, unless the price will hike, he added.

According to President Jokowi, the Government must maintain the balance in order to benefit both farmers and the public.

We maintain the balance, the stock maintains the balance so that prices will be under control, the President explained.

Regarding the low absorption of rice by Bulog, the President explained, the harvest time is yet to come. He added that the Bulog will continue to conduct market operations to reduce the stocks in the warehouse. Thus, when the harvest season comes, the Agency can massively absorb rice produced by farmers.