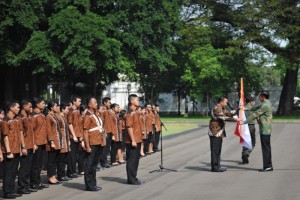 President Joko Widodo send off the Indonesian contingent for the Rio de Janeiro Olympic Games on Wednesday (22/06), at the Merdeka Palace Complex

President Joko Jokowi Widodo believes Indonesian athletes that will take part in the upcoming Olympic Games in Rio de Janeiro have the same spirit as their predecessors in 1952 Olympic Games, a passion to bring a good image of Indonesia in the world.

In 1952, Indonesia won a total of 27 medals in the Helsinki Olympic Games in Finland.

The athletes and coaches must have been overwhelmed spirits and I believe the same spirit must have also surged in the hearts of todays Indonesian contingent, President Jokowi said.

I’ll be waiting for the 28th, 29th, 30th medals and so on. I believe that these will make all Indonesians proud.” President Jokowi said when officially dispatching the Indonesian Olympic contingent to Rio de Janeiro, Brazil on Wednesday (22/06) at the Merdeka Palace Complex.

Yet, the most important thing than winning medals is the athletes can show the world that Indonesia is a great, strong, and competitive country, as well as having winning mentality, the President added.

The President also instructed the athletes to maintain fair play, discipline, and respect because all Indonesians have the values.

Thus, I hope the athletes can inspire all Indonesians when showing their values in the Olympic Games, President Jokowi said adding that he highly wait for Indonesian national anthem to be reverberated in Rio de Janeiro.

In the meantime, Minister of Youth and Sports Imam Nahrawi said Indonesia will send 60 people, both athletes and officials, to the 2016 Rio de Janeiro Olympic Games in Brazil to be held on 5 to 22 August 2016.

All athletes will get better facilities than they received in previous Games and they will get business class air fares, multiple bonuses, and a better future planning, Imam said.

My Ministry has been working on it since 2016, he adde.