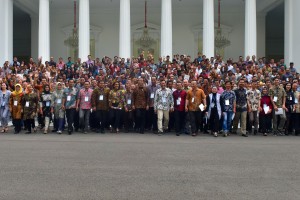 President Jokowi poses for a group photo with fishermen attending an amicable gathering at the State Palace, Jakarta, Wednesday (30/1). (Photo by : Rahmat/PR Division)

The Government continues to eradicate illegal fishing as 7,000 foreign ships that have been illegally entering Indonesian waters are not in sight anymore, according to President Joko Jokowi Widodo.

As the 7,000 vessels are gone now, Indonesias fish production should increase significantly, President Jokowi said during a meeting with the recipients of fishing license (SIPI), fisheries business license (SIUP) of 2019, at the State Palace, Jakarta, Wednesday (30/1).

The Government, he added, also wants the countrys marine resources to bring sustainable benefits for the people as well as for future generations. Therefore, people need to abide by fisheries regulation, he said.

Considering the fact that two-thirds of Indonesias territory is water, it is impossible not to catch enough fish. I think we cannot be left behind from our neighboring countries in fisheries sector, the President said.

In a dialog with a number of fishermen, President Jokowi also called for acceleration in issuing vessel permits. He went on to say that it takes 22 days for a fisherman to get the permit, and according to him, this is too long.

Let me tell you, we have cut time to issue investment permits at the Investment Coordinating Board (BKPM) from years to only hours. Now, 9 permits are issued in only 2 hours. In the era of Artificial Intelligence, Internet of Things, and virtual reality, permits must be issued in hours, not days, the President firmly said.

For that reason, the President said he had instructed Director General responsible for that matter to help the fishermen in applying for permit. Please guide them. In addition, Ministry of Maritime Affairs and Fisheries must also work fast and accurate, President Jokowi said.

The President also called on Minister of Maritime Affairs and Fisheries Susi Pudjiastuti to instruct Director General under her ministry to develop a system that can accelerate permit issuance. Do it in hours, not days or weeks because we are now living in the era of information technology, the President explained.

Also on that occasion, President Jokowi reminded related institutions to improve permits in fisheries so the Government can find out the exact amount of fish production per year. 7,000 to 13,000 illegal vessels are gone but there is no significant increase in our fish production. There must be something wrong, he added. (FID/RAH/ES)