President Jokowi Hopes Indonesia to Beat Japan in AFC U-19 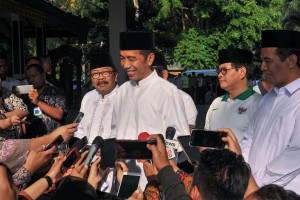 Indonesian U-19 Team must be optimistic and give their best for the nation and the country, President Jokowi told reporters after commencing Santri (islamic boarding school students) Friends of the People Fun Walk, at Sidoarjo Regency Square, in Sidoarjo, West Java, on Sunday (28/10).

Asking about his score prediction for the match, President Jokowi said that he does not care as long as we win. We hope that we can win the match, no matter the score is, he added.

Although the President is unable to directly watch Egy Maulana Fikri and other U-19 athletes fight in the match against Japan’s U-19 National Team, President Jokowi confirmed he will watch the match via live broadcasts from one television station.

On a different occasion, Head Coach of the Indonesia U-19 Team Indra Sjafri confirmed the readiness of the U-19 National Team players to face the match against Japan in the AFC Under-19 quarterfinals on Sunday (10/28) night.

According to Indra, Indonesia has a chance to defeat Japan, the top seed in this tournament.

We must remain optimistic and fight because the results cannot be predicted. Both Indonesia and Japan have chance to win, Indra said in Jakarta, Saturday (27/10). (UN/JAY/ES) (RAS/YM/Naster)