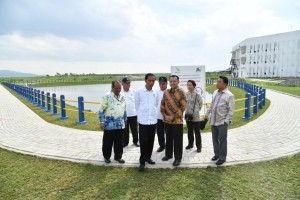 Higher educational institutions such as the Sumatra Institute of Technology (Itera) are expected to be a vehicle for students to prepare themselves in the face of the upcoming age of digital-based fourth industrial revolution.

This was enunciated by President Joko Jokowi Widodo when monitoring the Itera in South Lampung on Sunday (21/1). “I want the students here to follow suit, particularly to welcome the fourth industrial revolution which nowadays all requires engineers, coders. I learnt that the faculties have been headed in that direction,” the President told journalists.

According to the President, the future challenges facing the students are how the use of artificial intelligence technology and biotechnology can be applied to the lives around us. “I think this will be pursued, one of which is with accelerated development on the campus of the Itera,” the President said.

In the 275-hectare campus, several infrastructures including faculty buildings and access roads were built through Central Governments grants last year.

“The Central Government disbursed Rp50 billion for the development of some buildings and roads to ease access for lecturers, students, and the community from and to the Itera,” the President said.

Last year, the Ministry of Public Works and Public Housing built seven embung (retention basin) in order to maintain the condition of ground water. In addition, there are now three student dormitories which will be added to a total of five dormitories. “This year, we build two more dormitories. Three buildings from Dikti (Higher Education) and one from the State-Owned Enterprises (SOEs) in order to accelerate the development of Itera,” the President concluded.