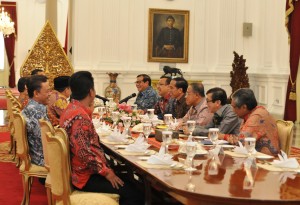 President Jokowi accompanied by several ministers conducts a consultation meeting with the Leaders of the House of Representatives (DPR) at the Merdeka Palace, Jakarta, on Friday (15/4) morning

A consultation meeting between the Indonesian House of Representatives (DPR-RI) led by its speaker Ade Komarudin and the Government led by President Joko Jokowi Widodo which was held on Friday (14/4) morning at the Merdeka Palace, Jakarta has agreed to immediately deliberate and finish the bill of the Law on Tax Amnesty.

Pramono added that President Jokowi also told DPR leaders that the Government has very complete data about the names in tax amnesty, both sorted by name or passport.  Therefore, he added, with the law, capital inflow is expected to enter the country.

If capital inflow can immediately enter the country, it can boost foreign exchange, as well as allow us to perform tax reconciliation and it can also be used as a part of the domestic budget to fund investment in the country, Pramono said, adding that President Jokowi has also instructed related parties not to let anyone or any group, or even disobedient taxpayers take advantage of the law.

The President also hopes the bill will be passed soon, Pramono concluded.

Attending to the meeting were the Speaker of the DPR Ade Komarudin, Deputy Speakers of the DPR Fadly Zon and Taufik Kurniawan, as well as several House of Representatives’ Commissions and fractions Chairman, as well as Coordinating Minister for the Economy Darmin Nasution, Minister of State Secretary Pratikno, Cabinet Secretary Pramono Anung, Minister of Law and Human Rights Yasonna H. Laoly, and Deputy Minister of Finance Mardiasmo. (FID/JAY/ES) (RAS/EP/YM/Naster)