President Joko Jokowi Widodo affirmed that the Government do not want to repeat the same old mistake, i.e. 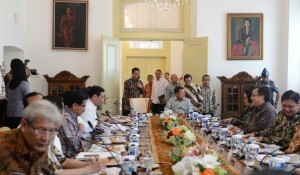 unsynchronized planning and budgeting as if they are two different regimes. In the future, hopefully we can achieve the targeted priority programs, the President said when delivering an introductory remarks at aLimited Meeting on Planning and Budgeting Integration to Optimize the Results of National Development, held at Bogor Presidential Palace, West Java, Tuesday (31/1).

The President, who was accompanied by Vice President Jusuf Kalla, reminded once again to carry out the policy of money follow the program. Do not just make a program but it is not implemented and still use the old way: money follow the function. Therefore, the President asked National Development Planning Agency (Bappenas) as well as Ministry of Finance to monitor this process, particularly in trilateral meeting with ministries/institutions. These meetings should be used to implement the policy of money follow the program, particularly for the funding of national priority programs.

Budget allocation and output that will be generated from each ministry/institution, the President added, must be carefully reviewed so they will match with the targets of the priority programs.

To Simplify the Procedure
On that occasion, President Jokowi asked the Governments high-ranking officials to leave sectoral ego and way of thinking that will slow down the process. Bappenas also, the President said, should not be trapped in sectoral style or become the agent to materialize sectoral interests. I would like to affirm once again, Bappenas as well as Ministry of Finance in particular, must be the guard of priority programs and should monitor the implementation of money follow the program policy, the President further said.