President Jokowi: If We are Careless, We Can be Conquered by Changes 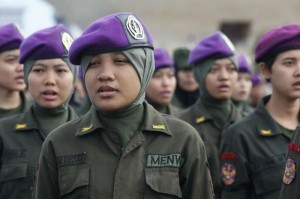 President Jokowi: If We are Careless, We Can be Conquered by Changes

Free trade wave and the tension of regional integrated economic zone will be intense in the upcoming years, the President added.

He also estimates that economic competition among countries will increase in the upcoming years, particularly on the access control of maritime resources, energy and food.

This is concrete challenges that we must surmount together. If we are careless about those things, we could be left behind and conquered by the worlds economic and political changes, President Jokowi said in his written mandate of the 2015 National Defense Day celebrated in several areas in Indonesia and nationally at the Cross Field of the National Monument (Monas), Jakarta, on Saturday (19/12).

Besides economic and political changes, according to President Jokowi, Indonesia is now facing security threats from transnational crimes against humanity.

The President reminded that radicalism and terrorism have become concrete threats to global security and peace.

Therefore, many of our young generation have become drug addicts because Indonesia has become the market or international drugs syndicate.

Many of our young people are trapped in the inhumane human trafficking network, President Jokowi said.

Meanwhile in Indonesia, the President added, we must face the challenges of poverty, as well as economic underdevelopment and imbalance.

The President explained that not all citizens could have access to health services, decent education, clean water facility and electricity facility that runs in their houses, as well as not free from the isolation.

They are all concrete challenges that we must face together, the President said.

The President also reminded other challenges, namely managing the plurality.

According to the President, plurality could become our great power if Indonesia can maintain it well.

The President mentioned that there are many examples that we could take, on how a nation could be divided and disintegrated  because they could not maintain the plurality.

President Jokowi called on every citizen to learn from the history of national struggle.

The President mentioned that history noted the fact that the Republic of Indonesia could stand as a sovereign country can not be separated from the spirit of the people to defend the Country, including the Indonesian National Defense Forces (TNI) soldiers, farmers, small traders, fishermen, Ulema (Islamic scholars), santri (Islamic students), and people from other elements.

According to the President, the challenges and threats faced by our country is our call to defend the Country.

The President hopes that the young generation must move to defend the Country based on their own fields.