President Jokowi: If We Can Emulate the Prophet Muhammad, Indonesia Would Become a Great Country 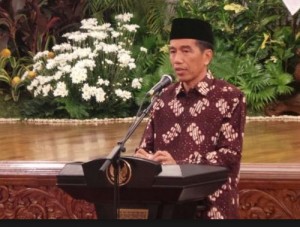 President Jokowi when delivering a speech at the commemoration of Maulid of the Prophet Muhammad, at the State Palace, Jakarta, Friday (2/1) night

“The commemoration of Maulid of the Prophet Muhammad should we interpret as an attempt to increase the role of Muslims towards Islam that Rahmatan lil alamin, or Islam which gives mercy for the universe,” Jokowi said.

In the event that was attended by the First Lady Iriana Widodo, Vice President Jusuf Kalla and Mrs. Mufidah Jusuf Kalla, President Jokowi also mentioned the two major catastrophe at the end of 2014, i.e: the landslide in Dusun Jemblung, Sampang Village, Banjarnegara Regency, Central Java and incidents of AirAsia QZ8501 crash on a flight from Surabaya to Singapore.

“In particular, let us pray for our brothers who have left us, both who stricken accident or disaster. May Allah accept the deeds, forgive all mistakes, and faults our brothers and sisters who have passed away, and the families left behind given the fortitude, “said President Jokowi appealed to the public.

Attending in Maulid of the Prophet Muhammad commemoration, among others; the Head of Justice M. Hatta Ali, Deputy Speaker of the House Fahri Hamzah, Minister of Religious Affairs Lukman Hakim Saefudin, the Ministers of Work Cabinet, and Ambassadors from Friendly Countries. (*/ES)