President Jokowi Iftar Together with Journalists 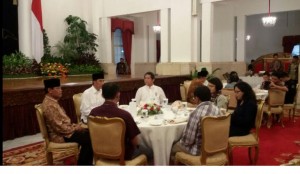 President Joko Widodo perform breaking fast (Iftar) together with journalists, who served in the Presidential Palace, on Monday (6/7) afternoon.

The invitation is divided into a number of round tables placed in the middle of the hall the National Palace.

During Ramadan, the President hold iftar with various groups, including orphans and orphanages, state officials, heads of state institutions, and artists and journalists.

Iftar begins with the recitation of the Qur’an by Qori – Muhammad Ali and then followed by Ramadan lecture delivered by Rector of Islamic University of Syarif Hidayatullah Prof. Dr. Dede Rosyada, MA.

In his lecture, that the titled Improving of Devoutness through Professionalism Enhancement, Dede invited journalists to think critically facing the nation’s problems and provide input on a variety of shortcomings.

He said, the fasting is worship directly commanded by Allah SWT to worship Him. Fasting is not merely to be healthy, but the main purpose is to worship.

“Fasting is worship. Behind the religious fasting there is a wisdom, so that you become cautious,” he said.

Dede said, there are two models of worship, the worship for the devout and worship created by Allah SWT.

According to Dede, worship for devout to Allah SWT are prayer, fasting, and the tithe as a package of worship to Allah SWT.

While worship created by God, is a worship that is immense with meaning and benefits, because of worship for 15 hours through the profession that they work every day. Profession referring to, among others, journalists, lecturers, and businessmen. (WID/ES)