President Jokowi: Important Role of Santri has been Acknowledged in Indonesian History 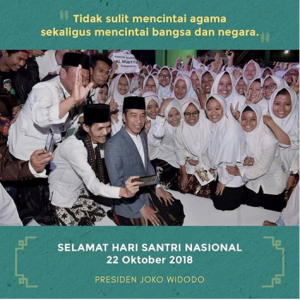 President Joko Jokowi Widodo said that our history has acknowledged the great role of the Ulemas (Islamic Scholars), Kiais (Islamic teachers) and Santris (Islamic boarding school students) during the independence struggle until today in maintaining the Unitary State of the the Republic of Indonesia and the State Motto Unity in Diversity (Bhinneka Tunggal Ika) as well as in leading the path to goodness and advancement.

Thus, three years ago I established National Santri Day, commemorated every year on 22 October in Indonesia, President Jokowi said through his personal Facebook and Twitter accounts.

According to President Jokowi, 22 October was chosen as National Santri Day because back to that date in 1945, Kiai Hasyim Asy’ari commanded his students to fight against Dutch colonialism in Indonesia. Today, we can enjoy the fruits of the Jihad Resolution declaration.

The President added that on Saturday (20/10) at Vastenburg Fort, Solo, Central Java Province, tens of thousands of santris from all over Indonesia commemorated the National Santri Day as a form of respect, appreciation and gratitude to the Kiais, Ulemas, Santris, and people who follow the exemplary conduct of the Kiais and the Ulemas.

Being a Santri means being a Muslim that loves the nation and has both moral and nationalistic attitudes, wrote President Jokowi. (ICE) (STU/AW/Naster)