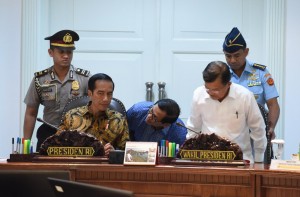 President Jokowi leads a limited meeting on Consumer Protection on Tuesday (21/3), at the Presidential Office, Jakarta

Indonesia’s consumer confidence index (IKK) which was at 30.86 percent last year is still considered low or only reached the level of understand, compared to that of the European which was at 51.31 percent.

The statement was made by President Joko Jokowi Widodo in his introductory remarks at a limited meeting on Consumer Protection on Tuesday (21/3), at the Presidential Office, Jakarta.

Therefore, the President believes that consumer education is needed because Indonesians only understand about their rights as consumers but they could not fight for their rights yet.

President Jokowi added that consumer education is also important for creating smart and wise consumers who are not suffer excessive consumerism, start to buy something which have long term benefits, save a lot, and invest in productive sectors.

Consumer was also disseminated to love domestic products, so the national industry can develop and can create more job opportunities, the President stated.

President Jokowi underlined that the Government must pay attention to consumer protection because it is concerning the presence of a state in protecting consumers effectively. The President added that the presence of a state is indicated by to what extent the norms and standards were achieved, and conformed by the producers, as well as to what extent that the law monitoring and enforcement is implemented effectively.

However, the President said that the data showed that producer compliance to Indonesian National Standards (SNI) is still low. Only 42 percent of goods in the market compliant with SNI. It means that something went wrong and needs to be fixed, President Jokowi firmly said.

Motor of the Economy

President Jokowi, in his introductory remarks said that during the past five years, consumer consumption contributed to 55.94 percent of the Gross Domestic Product (GDP). That means, Indonesian national economy is still driven by consumption.

Thus, the President asserted that consumer education and protection must become our common concern. It is something that we need to do because there were many cases where the consumers have been at disadvantage, or even have been endangered, the President added.