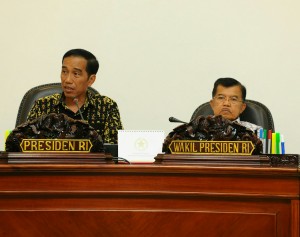 The President accompanied by Vice President led a limited meeting on the status of universities, at the Presidential Office, Jakarta (6/11)

Based on President Jokowi analysis, this is a good policy because it will improve equity in education in Indonesia, particularly in frontier, outermost, and underdeveloped areas.

I asked the Minister of Technology, Research and Higher Education to explain the development of the current problems, the President asked. The problems, according to the President are related to the area, asset availability, and the handover of the status of 4,300 lecturers and employees.