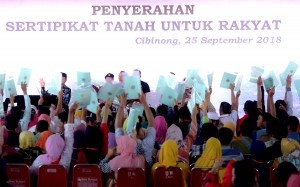 “I have checked (the data) at the National Land Agency (BPN). It says that there were only 500,000-600,000 certificates distributed throughout the country every year. Based on my calculation, we have to wait for 160 years before all the remaining certificates can be distributed,” the President added.

President Jokowi further said that during his visit to several regions in Indonesia, the people often complain about land dispute; thus, to solve the problem, his administration is committed to accelerating the land certification process through the agrarian reform program.

In the meantime, Minister of Agrarian and Spatial Planning/Head of the National Land Agency (BPN) Sofyan Djalil reported that at least 1,270,000 land certificates would be distributed in West Java province this year.

“For Bogor Regency, we target to distribute 80,750 certificates this year, while for Bogor City, we will distribute 60,000 certificates,” Sofyan said, adding that all parcels of land in two districts in Bogor City have been certified.

“Next year we will certify all remaining parcels of land in Bogor City. As for Bogor Regency, since it is very large, all of its parcels of land will be certified by 2025,” he added.