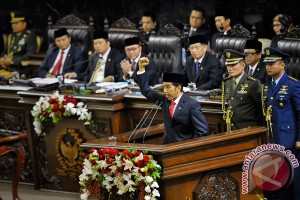 The government that I lead will work to ensure that every Indonesian will really get the feel of the Governments services, Jokowi said in his first speech as the President of the Republic of Indonesia in the Plenary Session of the Peoples Consultative Assembly (MPR), in the MPR/DPR Building, Jakarta, on Monday afternoon (20/10).

President Jokowi called on everyone, like fishers, workers, farmers, food vendors, street vendors, drivers, academicians, teachers, soldiers, police personnel, entrepreneurs, and professionals, to work hard shoulder-to-shoulder and cooperatively, because this is the historical moment for all of us to move, to work and work.

President Jokowi asserted that he wants to bring Indonesia into the midst of all other countries in the world with honor, dignity, and self-pride. We want to be a nation which can shape our own civilization, a great nation which is creative and can contribute nobility to global civilization, he asserted.

According to President Jokowi, we must work as best we can, to re-build Indonesia as a maritime country. He stressed that oceans, seas, straits, and bays are the future of our civilization.

We have too long turned our backs on seas, oceans, straits, and bays. This is the time we must get them back, so that our ancestors old slogan jalesveva jayamahe (on seas, we are glorious) can reverberate again, President Jokowi stated.

President Jokowi asserted that the huge work to build this nation cannot be carried out only by President and Vice President themselves or only by the Governments personnel, but it needs strong collective support and collective strength which represent the unity and the togetherness of this nation as a whole.

The next five years will be our critical moment as an independent nation. For that reason, work, work, and work must become one of our top priorities, Jokowi said and then expressed his conviction that by working hard and cooperating closely, we will be able to protect the whole people of Indonesia and the entire homeland of Indonesia, to advance general prosperity, to develop the nations intellectual life, and to contribute to the implementation of a world order based on freedom, lasting peace and social justice.

In the end of his speech, President Jokowi called on all Indonesians to remember one statement that Indonesias first President Soekarno had once made, i.e. that in order to build Indonesia into a great country, a strong country, and a prosperous country, we must have the spirit of the ocean rulers and the seamen who are brave to traverse rolling and crashing waves.

As the leader trusted by people, I call on all Indonesians to embark on the ship of the Republic of Indonesia and sail together toward Great Indonesia. We will set our strong sails wide, we will face all the storms and ocean waves with our own strength, Jokowi called out and then prayed that the One and Almighty God will always bless our noble joint efforts.

Previously, on his own behalf, on behalf of Vice President Jusuf Kalla, and on behalf of all Indonesians, President Jokowi expressed his deepest gratitude and appreciation to Dr. Susilo Bambang Yudhoyono and Prof. Dr. Boediono who had led the government in the last five years.