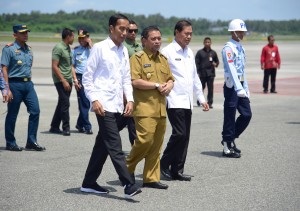 President Joko Jokowi Widodo, on Tuesday (7/5), paid a working visit to several regions in Kalimantan as a follow-up to the Governments plan to move the capital city.

The first region visited by the President is East Kalimantan Province where the President and his entourage arrived at Sultan Aji Muhammad Sulaiman Sepinggan Airport, Balikpapan City, at 11.55 Central Indonesian Time. Upon the arrival, they were welcomed by East Kalimantan Deputy Governor Hadi Mulyadi and a number of the Regional Government high ranking officials.

Afterwards, President Jokowi headed to the location which is considered as an alternative capital city to replace the overburdened Jakarta. From East Kalimantan Province, President Jokowi is slated to continue his working visit to Central Kalimantan Province. The President and his entourage will spend a night in Central Kalimantan provincial capital Palangkaraya before carrying on the working visit, including to survey other cities as an alternative capital city.

A day before the working visit, President Jokowi once again reiterated the Governments strong stance to move the capital city of the Republic of Indonesia before heads/leaders of Government institutions.

We are serious about this, given the issue has been discussed in internal meetings since three years ago. The Goverment had also asked the National Development Planning Agency (Bappenas) since 1.5 years ago to undertake more detailed reviews based on the economic, social-politics, and enviromental aspects, President Jokowi said during a communal fast-breaking with a number of heads of Government institutions at the State Palace, Jakarta, Monday (6/5). (UN/GUN/ES)