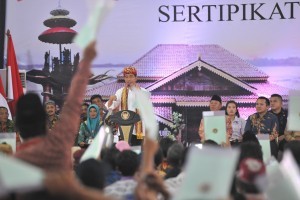 In his remarks, President Jokowi said that the Government will provide 264,000 land certificates for the entire Province of Lampung, 30,000 of them will be distributed to the residents of Central Lampung Regency this year.

President Jokowi reminded the residents who have received the certificates to keep their certificates well, secure them inside a plastic folder and make copies of them so if the original certificate is lost, they will still be able to claim the certificate to the National Land Agency (BPN).

President Jokowi also reminded the certificate holders to make careful decisions if they want to use their certificates as bank loan collateral. Make sure you calculate it first and be sure that you are able to pay the monthly installment, the President said.

“If you get loan from the Bank, lets say Rp300 million, use all of them for working capital and investment,” President Jokowi said, adding that they should also wisely allocate the money generated from the business.

In the meantime, Minister of Agrarian and Spatial Planning/Head of the National Land Agency (BPN) Sofyan Jalil reported that the Government aims to certify 264,000 parcels of land this year and all parcels of land in Lampung Province will be certified in 2023.

Also present during the event were, among others, Cabinet Secretary Pramono Anung, Minister of Public Works and Public Housing Basuki Hadimuljono, Coordinator of Special Staff to the President Teten Masduki, and Governor of Lampung Ridho Ficardo. (FID/JAY/ES)