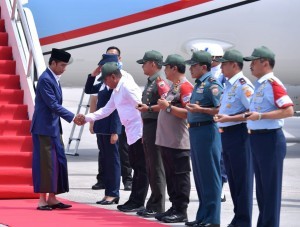 The President and his entourage departed from the Halim Perdanakusuma Air Force Base Jakarta by the Indonesian-1 Presidential Aircraft at 09.50 Western Indonesian Time.

The President and his entourage then went straight to Langkat Regency to have cordial meetings with Sheikh Haji Hasyim Al-Syarwani Tuan Guru Babussalam.

(Bureau of Press, Media, and Information of Presidential Secretariat/EN)