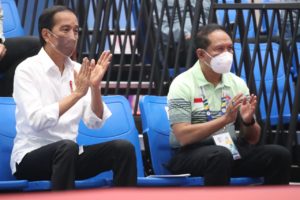 “I am in Papua this afternoon to watch the final matches at the Peparnas. Thank God, I had the opportunity to watch two Judo matches,” President Jokowi said in his press statement after the matches.

During the matches, President Jokowi was accompanied by Minister of Youth and Sports Zainudin Amali, Minister of State Secretary Pratikno, Minister of Investment / Chairperson of the Indonesian Investment Coordinating Board Bahlil Lahadalia, and Presidential Special Staffer Angkie Yudistia.

On that occasion, the President lauded the province of Papua for successfully organizing two national sports events, the 20th National Games (PON) and the 16th Peparnas. He also congratulated the province for securing the top position among other provinces competing in the Peparnas.

In the meantime, Angkie Yudistia said that the President’s presence in Jayapura reflected his support to all athletes with disabilities taking part in the Games.

“The President always reminds the athletes to improve their potentials. The Peparnas is an event for athletes with disabilities to showcase their talents and potentials which will make the nation proud,” she said, adding that the President is also very proud of the athletes and hopes they can further develop their skills and become representative of Indonesia in international events.

The President, she added, also appreciated synergy between the Central Government and regional governments in the organization of this year’s Peparnas.

For the record, after the Judo matches, President Jokowi is also slated to watch three badminton matches and lead the closing ceremony of the 16th Peparnas later in the evening. (FID/ANT/UN) (RAS/EP)