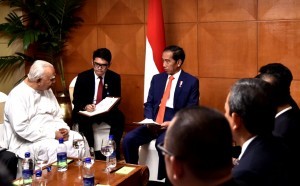 The visit is aimed at enhancing concrete and mutually beneficial cooperation for the two countries.

For the record, diplomatic relations between Indonesia and Sri Lanka has been established for more than six decades.

During this visit, I want to promote the strengthening of cooperation on various sectors, particularly on the economy, President Jokowi said, adding that one of the cooperation to be discussed is the establishment of Free Trade Agreement and cooperation on capacity building.

President Jokowi also expressed his hope that Sri Lanka can give Indonesia opportunity to participate in the economic development in that country.

I expect Sri Lanka Parliament to give us support in the strengthening of Indonesia-Sri Lanka ties, including by enhancing strong cooperation among both parliaments, the President said.

Like Sri Lanka, Indonesia, a country of diversity which upholds Pancasila (five principles) as the national philosophy, also continues to strengthen the national building process, the President added.

During state visit in India, President Jokowi is slated to attend the ASEAN-India Summit as well as the 25th anniversary of ASEAN-India bilateral ties and after visiting India, the President will head to Pakistan, Bangladesh, and Afghanistan.

President Jokowi hopes that all these visits can bring concrete benefits for the people not only in Indonesia but also in those five countries.