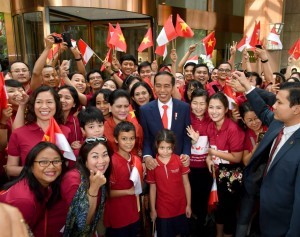 The President and the First Lady were greeted by Indonesian Ambassador to Vietnam Ibnu Hadi, Head of Vietnam State Protocol Mai Phuoc Dung, Head of the Presidential Office of Vietnam Dao Viet Trung, Vietnams Ambassador to Indonesia Pham Vinh Quang, and Vietnam’s Deputy Foreign Minister. A number of Indonesian people living in Vietnam also welcomed President Jokowi and the First Lady upon their arrival at the hotel.

In the afternoon, the President and the First Lady headed to Vietnam Presidential Palace to attend state ceremony and state dinner.

At the Palace, President Jokowi and Ibu Iriana were welcomed by Vietnamese President Tr?n ??i Quang and First Lady Nguyen Thi Hien

The two leaders inspected honor guard after the singing of national anthem of the two countries. President Jokowi and President Tr?n ??i Quang then introduced their delegates to each other. After a military parade, the two Presidents attend the tête-à-tête meeting and bilateral meeting.

For the record, President Jokowi is also scheduled to attend the World Economic Forum (WEF) on ASEAN set to be held at the National Convention Center (NCC), Hanoi, on Wednesday, as well as to have several bilateral meetings with Prime Minister of Vietnam Nguyen Xuan Phuc and Prime Minister of Sri Lanka. (BPMI/EN) (RI/EP/Naster)