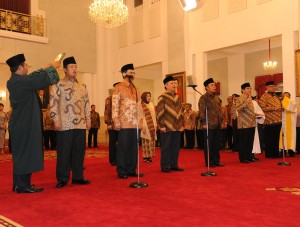 Inauguration of the Head of BNP2TKI, Head of BKPM, and Members of Commission on ASN at the State Palace on Thursday (27/11)

President Joko Widodo (Jokowi), inaugurated Franky Sibarani as Head of the Investment Coordinating Board (BKPM) and Nusron Wahid as Head of the National Agency for the Placement and Protection of Indonesian Workers Overseas (BNP2TKI) Thursday (27/11) afternoon, at the State Palace, Jakarta.

According to the Cabinet Secretary, Andi Widjajanto, Wahid Nusron appointment as Head of BNP2TKI, because he had a political closeness with Mr. Jokowi when the last campaign. Additionally, Nusron very active help and has a great attention to protect migrant workers abroad (TKI).

In the same place, President Jokowi also inaugurated the seven members of the Commission on Civil State Apparatus (ASN) namely: