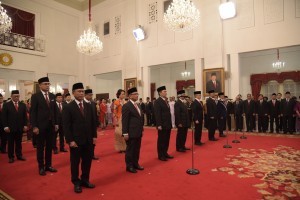 The inauguration ceremony was begun when Indonesian national anthem was reverberated by Marching Band of Presidential Security Details (Paspampres). Afterwards, Presidential Decree Number 1/P of 2019 on the Appointment of Ambassadors Extraordinary and Plenipotentiary of the Republic of Indonesia set out in Jakarta, dated on 7 January 2019 was read and the 16 ambassadors took their oath and inaugurated by the President. Then, they signed the minutes of the inauguration.

The 16 Ambassadors Extraordinary and Plenipotentiary who were inaugurated by President Jokowi are, as follows: