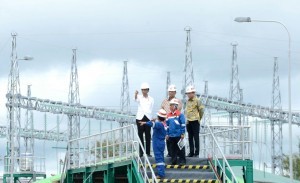 The Government will continue to scrap and simplify permits to realize the target to develop power plants of 35,000 Mega Watts (MW), President Joko Jokowi Widodo said.

However, the President admitted that the Government is now calculating whether the target can be realized or not, given the global economic slowdown. It must be calculated if the target of 35,000 MW can still be realized amidst the current economic growth. The calculation still needs to be done. Though Indonesias economic growth is good, we still need to calculate it, President Jokowi said after inaugurating Lahendong Geothermal Power Plant (PLTP) Unit 5 & 6, and Ulubelu Geothermal Power Plant (PLTP) Unit 3 on Tuesday (27/12), in Tompaso Subdistrict, Minahasa Regency.

According to the President, out of the total 29,000 MW of Indonesias Geothermal Power Plant potential, only 5 percent has been realized. Therefore, the President asked the 95 percent to be implemented because Indonesia has great potential and the Governments target is to develop 7,500 MW in 2025.

Those projects cover the construction of Lahendong PLTP unit 5 & 6 with the capacity of 2 x 20 MW in Tompaso, North Sulawesi, which has investment value worth US$282.07 million or Rp3.3 trillion. The projects were targeted to be finished by December 2016 for Unit 5 and June 2017 for Unit 6, but Unit 5 is finished on 15 September 2016 or 3 months prior to the target, and Unit 6 is finished on 9 December 2016 or 6 months prior to the target.

Lahendong PLTP Unit 5 and 6 use total project scheme and have strengthen electricity system in Sulawesi by supplying the electricity to 20,000 houses. During the construction, the project absorbed more than 750 local workers.

The next project is Ulubelu PLTP Unit 3 in Tanggamus, Lampung, with the capacity of 1 x 55 MW which has investment value worth US$250 million or Rp2.88 trillion. The construction of the project that also uses total project scheme is started on 5 July 2015 and is targeted to be finished in August 2016. However, the construction is accelerated so the project is finished on 26 July 2016 or a month prior to the target. During the construction, the project absorbed more than 2,000 workers.

Pertamina President Director Dwi Soetjipto said that the energy infrastructure projects constructed by Pertamina is expected to bring domino effect to the life of our people. It starts with the electricity distribution, to the opening of new job during the implementation of project and after the project since new industries will be developed due to a more powerful power supply. As a state-owned enterprise in energy sector, Pertamina is proud to give its best contribution for the country by constructing energy infrastructure all around Indonesia, Dwi added.