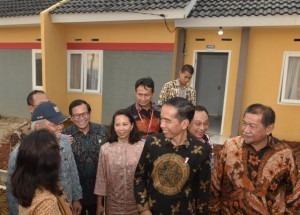 There are 8,749 housing units to be built in this 105-hectares landed housing which name is Villa Kencana Cikarang. This project is part of the program to provide one million houses for low-income people.

In his remarks, President said that the Government wants to provide houses for the people. Considering that the price of land in urban and industrial areas is increasing, it is important for the Government to fulfill peoples basic need to have a house.

The President is happy with the construction of affordable housing like Villa Kencana Cikarang. There are 4,734 housing units that have been built and there are still 4,015 housing units to be built. The future owners of 3,600 housing units have finished the process of credit agreement.

The type of the house is 25/60, which means the building area is 25 meters, while the land area is 60 meters. The house, which price is around Rp112-140 million, comprising of two bedrooms and one bathroom

I think it is more than enough. Years ago, I rented a house. I rented it for nine years before I have my own house. Though it has only two bedrooms, it is better than renting a house, the President said. Hopefully, people can afford to pay the installment.

Previously, in Tangerang, the President inaugurated low-cost apartment project which installment is Rp1.2 million while Villa Kencana Cikarang is landed house. That is the different.

The President has calculated, with the price of Rp112-140 million, if the salary is Rp3.5 million per month, it is enough to pay the installment of Rp750 thousand per month.

Allah is that who gives livelihood. If you have more money you can buy a bigger house. However, at least people already have a house, the President said adding that the Government gives the subsidy of Rp4 million for down payment.

The President admitted that these houses do not have a kitchen yet, because it uses growing house concept. There is still free area that can be used since the building area is only 25 meters. This kind of house will be built in all over Indonesia, the President said.

The President said that the budget for this project has been included in the State Budget and in Budget Implementation Entry List (DIPA) at the Ministry of Public Works and Public Housing. The Government is optimistic that the target could be reached.

After the President pressed a button to mark the inauguration, he also witnessed the signing of credit agreement of 1,200 housing units and inspected one of the housing units.