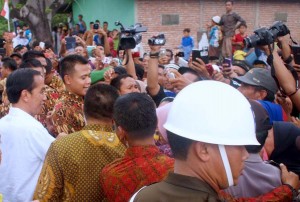 President Jokowi and his entourage landed at Sultan Mohamad Salahuddin Airport, Bima, at 12.00 a.m. Central Indonesian Time and were welcomed by the Governor of NTB TGH Muhammad Zainul Majdi. The President and his entourage headed to Al-Hidayah Mosque, Talabiu Village, to perform Friday prayer.

President Jokowis visit to the mosque to perform the Friday Prayer was enthusiastically welcomed by the people. They struggled with each other to shake hands or to take selfies with the President.

On that occasion, the President asked all sellers to manage Amahami Market into a market with a  neat arrangement of goods, free from inundation, and not smelly.

The goods that they sell must be in good arrangement, the President said.

Even though the construction of Amahami Market has been finished, President Jokowi admitted that as many as 500 sellers are still occupying the areas at the side of the market due to limited place in the market.

I have instructed Minister of Trade to expand the market so that all sellers can sell their goods there, President Jokowi said while promising that he will visit Bima again next year.

President Jokowi also inspected the condition of the building and observed several vendors in the area and had a discussion with Nurjanah, a tomato seller in Amahami Market.