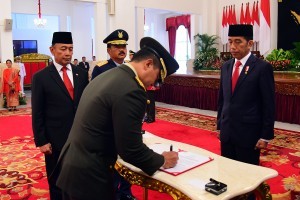 For the record, the military rank of Andika Perkasa was risen one level to become General and he replaced General Moelyono, who is about to enter his retirement.

General Andika Perkasa was born on 21 December 1964 and has a good career in the TNI. He was appointed as Head of Information Service (Kadispen) of the Indonesian Army (TNI AD) on 8 November 2013 with rank of Brigadier General.

After that, he became Commander of the Presidential Security Detail (Paspampres) to replace Major General Doni Munardo and got a promotion as Major General.

In 2016, Andika Perkasa was appointed as Commander of the Tanjungpura Regional Military Command (Pangdam). On 15 January 2018, he became Commander of, Education, Training, and Doctrine Development Command of the Indonesian Army (Dan Kodiklat TNI AD) with Lieutenant General rank.

Now, at the age of 54, Andika Perkasa officially holds a 4-star general, after President Jokowi appointed him as Army Chief of Staff replacing General Moelyono. (MAY/AGG/ES)