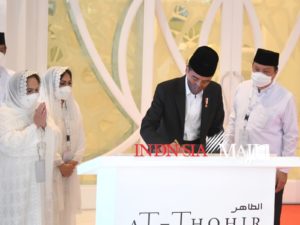 The President expressed hope that the Mosque can improve Islamic knowledge and study of the people beside serving as a place of worship for the Muslims.

“(To be) the center for modern dakwah (Islamic preaching) which educates and enlightens Muslims, as well as to be a place to build and strengthen silaturahmi (communal bonds), brotherhood among Muslims and contribute to create advanced civilization of Indonesia,” he said.

He added that the Mosque can also serve as a bond to strengthen tolerance and moderation in religion and promote Islam as “rahmatan lil ‘alamin” (blessings for the whole world).

The Head of State said that the Mosque which has beautiful architecture and harmonious design reflected the important value of family in Islamic grandeur eminence and its crucial role in shaping Islamic characters.

“As previously mentioned, it is reflected in the building where the biggest dome on top of the mosque is surrounded by three medium and small-sized domes. The design is very harmonious, warm, and beautiful,” he stated.

The Mosque which has classic modern architecture was built on a 2.8 hectare of land and can accommodate 1,976 people inside the mosque and 1,395 people inside a supporting plaza.

For the record, At-Thohir Mosque was built by Minister of State-owned Enterprises Erick Thohir with hope to bring benefits and prosperity to the people in general, as his late father’s wishes, Mochamad Thohir.