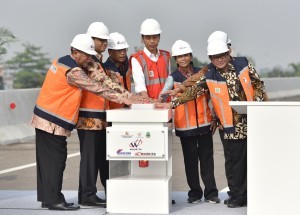 After being halted for around 21 years, the construction of Section 1B and Section 1C of Becakayu Toll Road spanning around 8 kilometers was inaugurated by President Joko Jokowi Widodo on Friday (3/11).

The inauguration was marked by the symbolical sounding of a siren and the signing of an inscription.

President Jokowi also instructed related ministries to immediately resume the construction of other sections of the Toll Road.

Regarding land acquisition, President Jokowi is optimistic that the issue could be addressed. I think we have to move ahead. Trust me, well just move ahead. Three years ago, nobody would believe that the construction of these sections could be completed but now it has completed, the President said.

The operation of Becakayu Toll Road is believed to shorten trip duration between Bekasi and Jakarta from the previous 2 hours to around 1.5 hours, while trip duration from Bekasi to Kampung Melayu in East Java is estimated to be just around 30 minutes. The Toll Road is also expected to smoother logistics traffic from Jakarta to Karawang, Cibitung, and Bandung because vehicles no longer have to pass by streets within Jakarta but can now directly pass through Wiyoto Wiyono Toll Road and the Jakarta Outer Ring Road (JORR).

For the time being, Becakayu Toll Road is free as the Government is still calculating the fee with related stakeholders.