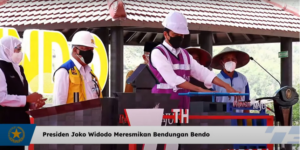 “First and foremost, I would like to praise and thank God Almighty. Alhamdulillah, as of this afternoon, Bendo Dam has finished and ready to operate,” President Jokowi said.

This multifunctional dam that was built at a cost of Rp1.1 trillion has a capacity of 43 million cubic meters, a height of 74 meters, and a puddle clay area of 170 hectares.

Based on the capacity, the dam is able to provide water irrigation for 7,800 hectares of rice field, raw water supply amounting 370 liters per second, and reduce floods by 31 percent or 117.4 cubic meters per second.

On that occasion, the Head of State went on to say that there are 17 dams across the country that have been and will be completed this year.

“We also had inaugurated Kuningan Dam in West Java province on 31 August 2021 and Way Sekampung Dam in Lampung province that had been inaugurated in the beginning of this September. Now, we inaugurate Bendo Dam in Ponorogo regency, East Java province,” President Jokowi added.

In addition to those seven dams, there are 10 more dam constructions that nearly complete and will be inaugurated this year. The dams are as follows:

President Jokowi expressed hope that the dam will be able to increase the productivity of farmers and agriculture sector as well as increase water supply.

“I hope, this dam can be optimally utilized and connect all irrigation networks in the region so that the people, especially farmers can increase their agricultural productivity,” the President remarked. (FID/UN) (AP/MBB)