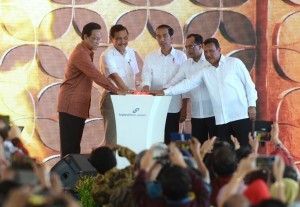 In his remarks, President Jokowi said that the construction plan of NYIA in Kulonprogro has existed since six to seven years ago. “It does not materialize soon because it has been repeteadly postponed,” the President said. Therefore, when Yogyakarta Governor Sri Sultan Hamengkubuwono X told the President about his idea to build a more representative airport compared to Adisucipto Airport in Sleman, President Jokowi directly requested that the plan be reported and started immediately. “Any work, any decision must have the risk. Therefore, if the work is not implemented soon, it will have not completed,” the President affirmed.

To this end, President Jokowi considered that he must take a decision to build NYIA given the Adisucipto Airport has a capacity of only 1.5 million, which is already very crowded. “The number is huge since the number of tourists who come to Yogyakarta is increasing due to the culture of Yogyakarta is always maintained,” he said. According to the President, the construction of the NYIA is indeed global and international-oriented airport, and supported by excellent facilities.

After delivering his speech, President Jokowi, accompanied by Coordinating Minister for Maritime Affairs Luhut B. Pandjaitan, Minister of Transportation Budi Karya Sumadi, and Yogyakarta Governor Sri Sultan Hamengkubuwono X, pressed the siren button marking the start of the construction of NYIA, and was followed by the laying of red brick and poured water from seven water sources from the villages affected by the NYIA construction, which means the construction of the Airport is useful and a blessing to the community.

The NYIA located in the Village of Jangkaran, Temon Subdistrict, Kulonprogo Regency, Yogyakarta Province, will be built on an area of ??587 hectares.

Minister of Transportation Budi Karya Sumadi said that on the construction of the first phase (2020-2031) a terminal with an area of ??130 thousand square meters will be built, a runway of 3,250 meters long and 60 meters wide, with a capacity of apron is 35 aircraft, so it is expected to accommodate 15 million passengers per year.

On the construction of phase II (2031-2041), the NYIA  terminal will be developed into 195 thousand square meters, a runway of 3,600-meter long and apron capacity of 45 aircraft, and can accommodate up to 20 million passengers per year. “This means 10 times the capacity of previous airport (the Adisucipto Airport),” Budi said.

The NYIA is expected to overcome the shortcomings in Yogyakarta’s Adisucipto Airport, improve the quality of service to airport services, and spur economic development, business activities, and support tourism activities in Yogyakarta and southern Central Java.