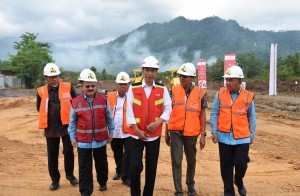 The President explained that the construction of toll road would cut the travel time between the two cities from nine hours to just three hours.

Therefore, the President believes the construction of the toll road will be able to facilitate the mobility of society and the business world so as to increase economic growth.

“If we want to win the competition with other countries that are very fundamental and very basic, what we must do is first the infrastructure. Because with this infrastructure, transportation and logistics costs will be much cheaper,” the President said and added that if the costs of logistics and transportation decrease, it can improve Indonesias competitiveness.

The President also confirmed that the infrastructure will also strengthen the promotion of tourism in West Sumatra. He reminded all that the beautiful scenery in West Sumatra has the potential to develop, let alone supported by good road access infrastructure. “If the infrastructure is ready, it can develop three times, four times, even five times because the speed of travel from one city to another, from one city to regency becomes very fast,” the President explained.

Meanwhile, the Minister of Public Works and Public Housing Basuki Hadimuljono said in his report that the construction of the Padang-Pekanbaru toll road requires an investment of around Rp78 trillion.

“The project is slated to be carried out in the course of 2018-2023. There will be a 7-kilometer tunnel to be done by using a loan facility in the form of private sector investment financing from JICA (Japan International Cooperation Agency),” Basuki concluded.

The construction of the Padang-Pekanbaru toll road will be conducted in three stages, namely stage one of the 28-kilometer Padang-Sicincin, stage two of the 38-kilometer Bangkinang-Pekanbaru, and stage three of the 189-kilometer Sicincin-Bangkinang. (DNA/GUN/ES) (MUR/MMB/YM/Naster).