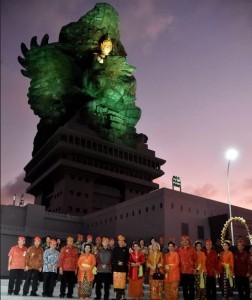 President Joko Jokowi Widodo expressed pleasure and pride over the completion of the Garuda Wisnu Kencana (GWK) statue construction. It is one of the worlds largest copper sculptures and the third highest statue.

According to the President, the statue is a nation’s masterpiece.

I was informed that the statue is higher than the statue of Liberty in the United States, the President said in his remarks during the inauguration of the statue in Badung Regency, Bali, Saturday (9/22).

According to President Jokowi, the completion of the statue not only brings pride for Balinese people, but also for all Indonesian people. He added that it proves that Indonesia not only inherits the great works of the past civilization such as the beautiful Borobudur Temple and Prambanan Temple but can also create a new masterpiece that the world can admire.

The President added that in the era of technological advancement these days, the development of cultural arts must be integrated with technology.

For the record, besides combining Indonesian cultural arts, especially Balinese arts, the statue is also made through technological advancements such as windnel (wind resistance) tests in Australia (Windtech) and Canada (RDWI), periodic cavity test, and also soil test. The statue was made with copper and brass material, supported by 21,000 steel rods with a total weight of 2,000 tons and a total of 170,000 bolts. The construction began from August 2013 until July 2018.

With this combination, the GWK statue will be able to stand still for approximately 100 years and I am sure that the statue will still be discussed by then. It will be the pride as well as cultural heritage of Indonesia, President Jokowi said.

On that occasion, the President added that behind the success of the construction of the statue, there is courage to think and dream big as well as to pursue it consistently that can be an inspiration for the people. According to him, without courage, it would be difficult to produce great works. I notice that the statue does not only become an icon of Balinese culture or Indonesian tourism icon, but a historical site as well. Our nation will be able to produce great works if we are dare to start with big ideas, he said.

The President also applauded I Nyoman Nuarta  the sculptor of the statue – for his great ideas, courage and consistency to build it for 28 years. The President also thanked all those who had worked hard to complete the 12-meter-high statue.

The effort to build the statue is also supported by many elements, such as the local government and the people of Bali, as well as private companies, President Jokowi concluded, adding that he also encouraged artists and cultural observers to continue their creativity to produce the best works which will enrich Indonesian civilization. (BPMI/EN) (GWH/EP/Naster)