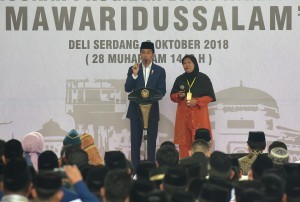 In his remarks, President Jokowi said that the Government currently has established micro waqf banks, each is given capital of approximately Rp 8 billion, in 33 islamic boarding schools.

The establishment of the micro waqf bank, according to the President, is the Governments response to the complaints of people living in villages or Islamic boarding schools area about the difficulty to access banking services due to complicated administration, including the requirement of collateral provision.

In fact, the President continued, the people need financial access for business and investment capital. Therefore, President Jokowi added, the Government had initiated the establishment of micro waqf bank.

President also said that later everyone can borrow money and repay it in installment scheme with no collateral.

Later in the future, when the number of the banks has been developing, we hope to merge these micro banks into one major bank, said President Jokowi, adding that the Government currently is in the early stage of building the micro waqf bank.